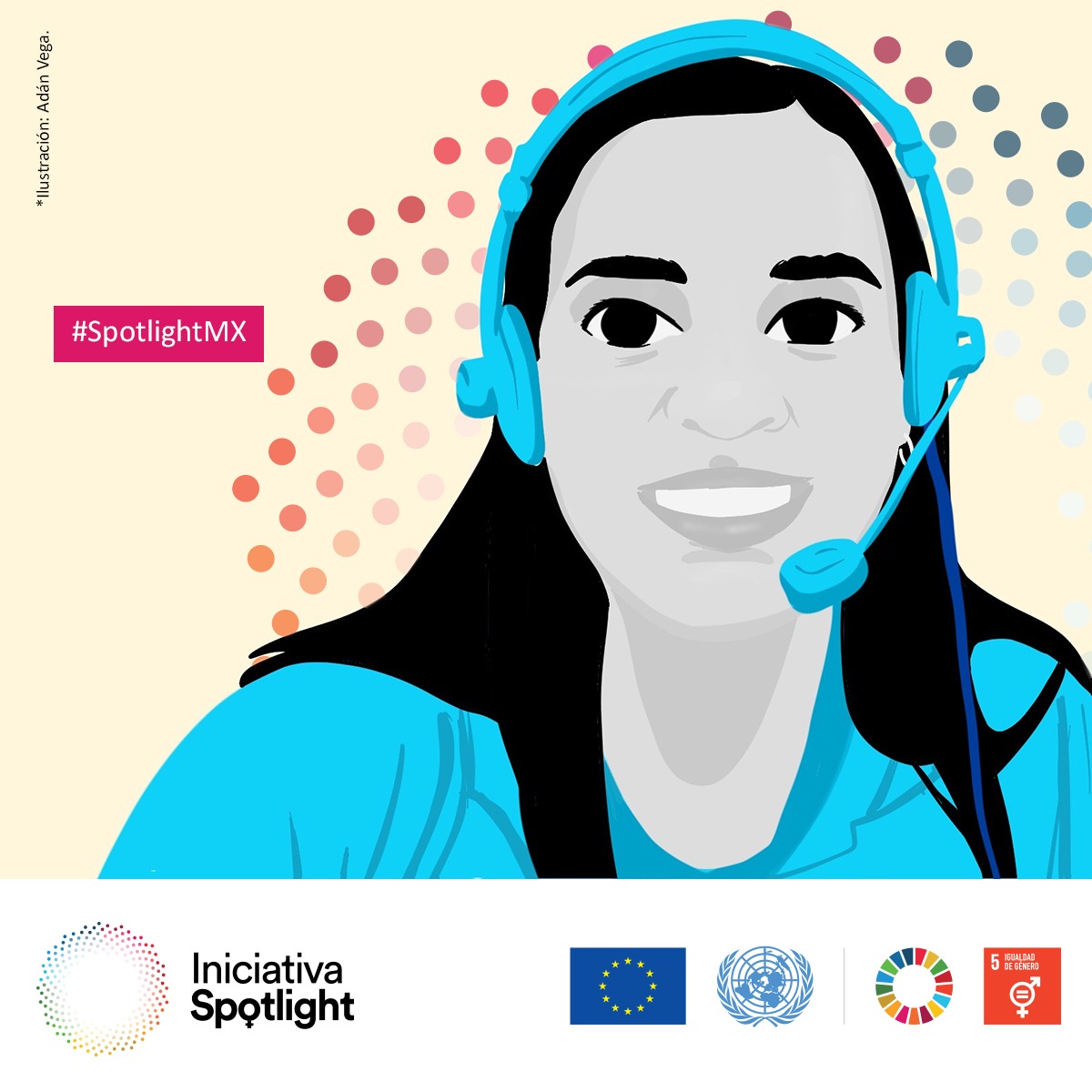 This crisis is a reminder of the essential contribution of women. For this reason, as part of the work of UN Women in the framework of the UN Initiative "Spotlight in Mexico"- supported by the European Union in coordination with the Government of Mexico-, and with the aim of making the role of women visible in the context of COVID-19 and its contribution to Mexican society, we share the stories of heroine women in between of the pandemic.

Humanitarian emergencies, disasters, and pandemics put women and girls at greater risk of violence. The current COVID-19 crisis is no exception. Violence against women and girls is the most tolerated and widespread violation of women's human rights worldwide, in both private and public spaces. The causes of this violence are gender inequality and discrimination, as well as the harmful social norms and masculinities still in place in our societies.

Diana Macías Santos' voice is soft, speaks with tranquillity and conveys peace. Part of her professional experience consists of detecting the levels of risk of those who call Línea Mujer y Familia (Woman and Family Help Line). For weeks now, her work has tripled due to the confinement amidst the health emergency caused by COVID-19. "We know a case could be more serious when we are asked to call at a certain time or when the person on the line shifts the conversation —a sign that they are unable to speak". Diana has become an expert in pretending to be someone the victim knows in case the aggressor picks up, since the victim's safety comes first. WhatsApp has made it easier, as victims can send messages to 55 5533-5533, and even send photos or videos, making it simpler to attend to cases.

Diana is a psychologist and is literally in the front line of the pandemic in Mexico City. She has been working for Línea Mujer y Familia —a project of the Mexico City Citizen Council for Security and Justice— for seven years, and is part of a team of 102 psychologists and 85 lawyers who spread out their schedules so as not to leave this support service unattended, 24 hours a day throughout the year.

In a call-center-type room, these professionals attend to the calls of hundreds of women every day to report acts of psychological, sexual, and physical violence. In March 2020, the month when confinement began,these calls for help rose 70% as compared to the same month in 2019. 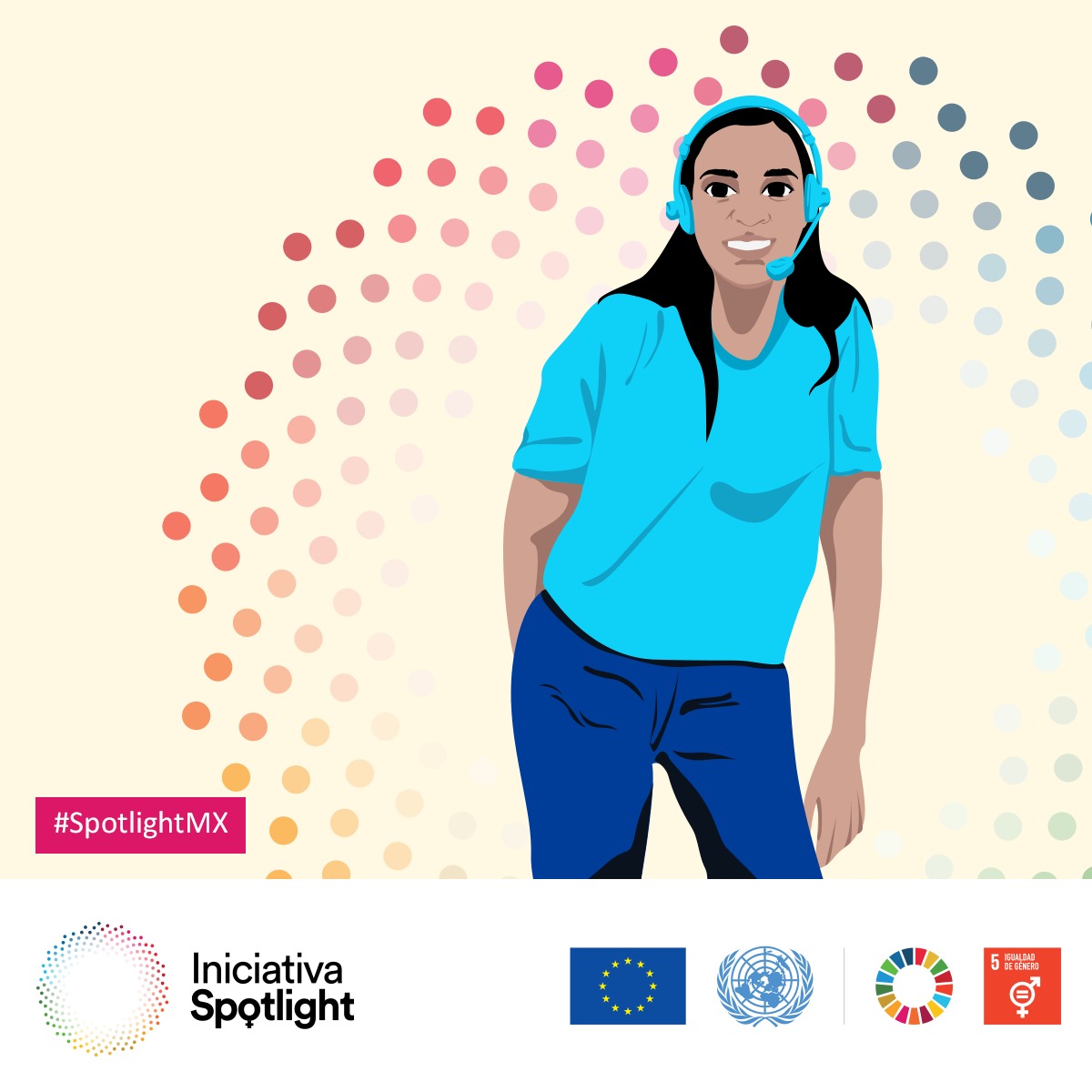 A few days ago she attended to the case of a 25-year-old girl, victim of psychological and physical violence that also affected her children of 3 and 6 years of age. "It happens that many women tolerate violence in their bodies, but they decide to report as soon as their children are touched. We went to a Women's Justice Center in Iztapalapa, we went through the whole procedure, and she was referred to a shelter because she had no support network in the city. She was there for several days until until she was transferred to another state to stay with one of her relatives.

The quarantine has turned on the red lights because "in these times, forced to stay home, many women spend all of their time with their abusers, and do not have access to support networks," she explains.   The isolation and restriction of movement measures dictated by the pandemic are having repercussions such as increased levels of stress, economic and food insecurity, decreased income and unemployment, which can significantly increase the levels of violence against women and girls in the domestic sphere and increase the barriers they experience to break out of cycles of violence, leave their abusers or activate support networks.[1]

Diana knows that it is not easy for a victim of violence to report. "It is not the same to report a criminal who stole your bag as it is to report a partner you once chose and who has now become your worst enemy,” she states. Globally, 243 million women and adolescents between the ages of 15 and 49 have been victims of physical and/or sexual violence at the hands of their partners[2]. In Mexico 43.9% of women have experienced violence from their current or last partner.[3]

The campaign for the contingency in the metropolitan area is called "No estás sola" (You’re not alone), and Locatel and 911 calls are channeled to the Línea Mujer y Familia help line. A similar effort on the federal level is the campaign in which UN Women accompanied the Secretariat of the Interior and the National Commission for the Prevention and Eradication of Violence against Women (Conavim), also called "No estás sola" (You’re not alone). The goal of this campaign is to generate information on violence against women and girls, to publicize the actions that should be taken if an aggression of this kind occurs, and to facilitate the contact of institutions that can provide help.

Similarly, for the prevention and elimination of gender-based violence in the framework of emerging actions in this respect in times of COVID-19, the video #NoEstásSola (#YouAreNotAlone) was launched in the context of the Spotlight Initiative in Mexico. The goal is to let a larger number of women at risk know that there are institutions and organizations designed to provide care, keep them safe, and ensure their security. The various entities collaborating in the Spotlight Initiative are doubling efforts in the areas of prevention and care regarding violence against women and girls in order to meet the demand of current times.

"What I like most is being able to support them and accompany them to make a complaint. In the end, the satisfaction comes when I see their faces and they say, 'thank you, I feel safer'," concludes Diana on the other side of the line.

Taken from the original text by Cristina Salmerón.

[1] UN Women. COVID-19 and its impact on VAWG. Consulted at: https://mexico.unwomen.org/es/digiteca/publicaciones/2020-nuevo/abril-2020/covid19-y-su-impacto-en-la-violencia-contra-las-mujeres-y-ninas

[3] INEGI. National Survey on the Dynamics of Relationships in Households (ENDIREH) 2016.