Shunaxi Martínez Santiago is a 31-year-old mother from the municipality of Juchitán de Zaragoza in the Mexican state of Oaxaca. During the September 2017 earthquake, she lost her house, which forced her to move to another town together with her two children.

Before the earthquake, she had worked at a company for 10 years until she gave birth to her second child, and decided to launch an online business: “It was very difficult to quit my job and dare to do something new, as I had a secure income. At the beginning, I thought it was impossible, but I also thought of my children, of being able to spend time with them; of my daughter, who was about to go to middle school; of my baby, who had recently turned one year old. Then, I decided, in spite of everything, that I would start a business on my own,” said Shunaxi.

Months after launching her online business and having lost her house during the earthquake, she received an invitation to attend the UN Women and Bonafont training courses as part of the “Avancemos por la igualdad” (Moving Forward Equality) economic recovery program. “I was very excited to participate in the trainings. The first months, I had to travel for one and a half hours from Matías Romero to Juchitán, where I used to live before the earthquake. I would leave at 10 am in order to arrive on time. I wanted to learn about entrepreneurship, and apply that knowledge to my online business,” mentioned Shunaxi Martínez.

During the first six workshops, taking place every Tuesday and Thursday, Shunaxi would commute from one town to the other in order to attend the trainings. On the days prior to her weekly trip, she would try to sell as many products as possible, such as makeup, baby accessories, among others, in order to compensate for the days she would be off while on training. In addition, she made an effort to sell more in order to pay her transport expenses and not to miss any lesson.

Currently, Shunaxi sponsors and raises funds for people suffering from different illnesses and for individuals with disabilities. As a result of her participation in the Program, she created a cooperative called Mujeres Artesanas de Juchitán (Craftswomen of Juchitán), selling crafts through a Facebook page. “My goal with what I learned in the trainings is to finally be able to set up a physical shop in Juchitán,” stated Shunaxi Martínez. 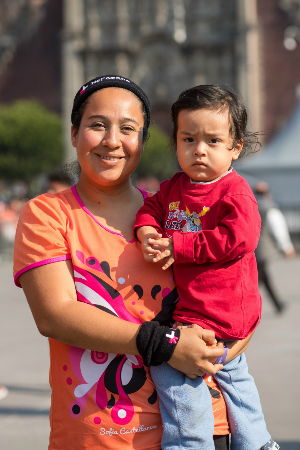 Shunaxi Martínez is one of the 152 women who graduated from the "Avancemos por la igualdad" capacity strengthening program, which is part of the global partnership between UN Women and Grupo Danone. 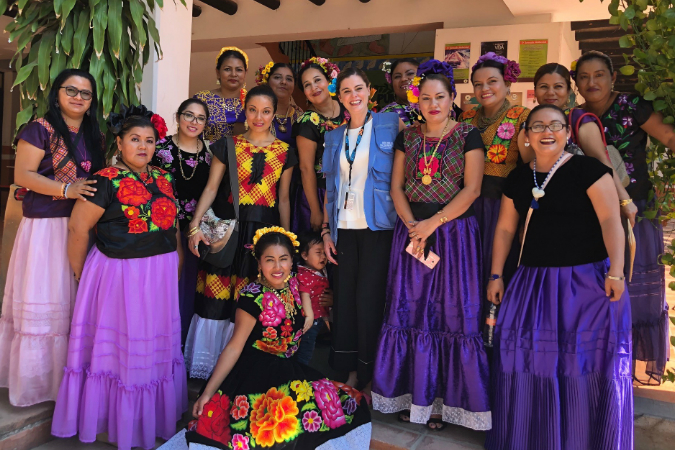 As part of their partnership in Mexico, UN Women and Bonafont –a brand of Grupo Danone– launched the Program in 2018 focused on the economic empowerment of women in communities affected by the 2017 earthquake in Mexico City and Juchitán de Zaragoza, Oaxaca. The goal of the Program is the economic reactivation of areas affected by the earthquakes through innovative business initiatives. Some of these enterprises intend to be time-saving, such as cocinas económicas –simple restaurants built around home-cooked food–, day care facilities, nurseries, and launderettes.

“At the trainings, I learned all about organizational skills and costs, but also not to work for free, and value my work and what it represents. As an online retailer, I need to find product delivery spots. At the training, I learned how to become organized, as well as to keep control of my expenses and purchases,” added Shunaxi Martínez. 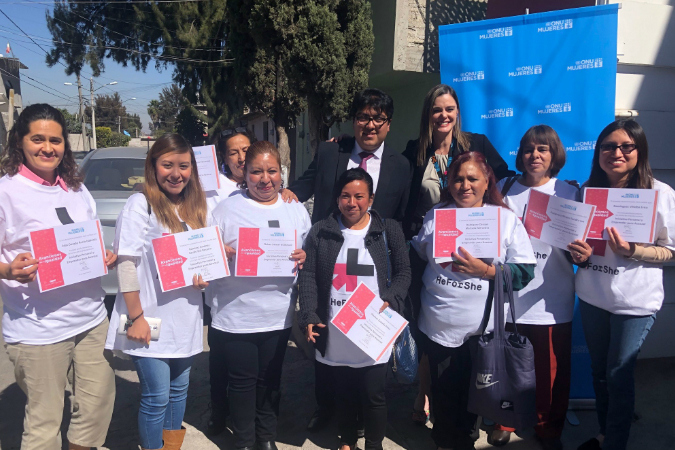 In the case of Mexico City, Guadalupe Chávez Salazar, aged 40, and Irma Jiménez Estrada, 47, also decided to attend the trainings, as their borough, Iztapalapa, was one of the most severely damaged areas in the city during the earthquake.

“We decided to work as a team after several buildings collapsed in our neighborhoods. Many families were affected. Yet, mothers have to go to work, so we decided to support our community by setting up a cocina económica (restaurants that serve accessible homemade-like food). Both Irma and I take care of our households, and these trainings have helped and inspired us to pursue our project and learn about ways to achieve it. We hope that in 6 months, with all the knowledge we have acquired, we will be able to make our cocina económica a reality", added Guadalupe Chávez. 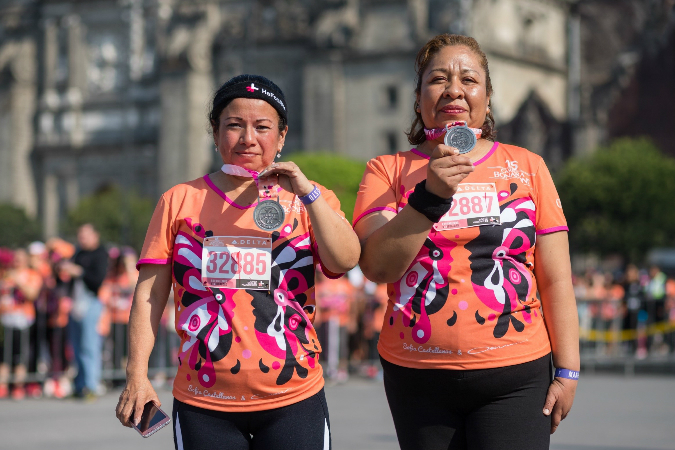 Guadalupe Chávez, Irma Jiménez and Shunaxi Martínez participated in the Bonafont Race for a Cause on March 10th, which is the world's largest women’s race and is part of the global partnership between UN Women and Grupo Danone. “The energy of all those women. Seeing that I was not the only one running with my child in arms, but that there were many other women holding their babies too. Seeing young, adult, and elderly women filled me with joy, and reaching the goal was a great satisfaction,” said Shunaxi after receiving her medal. 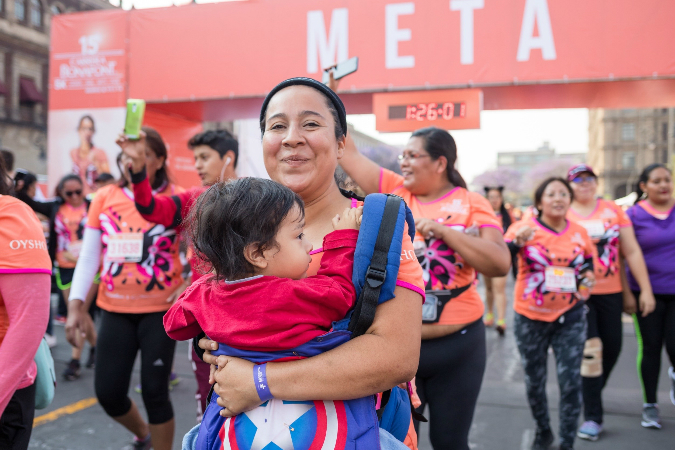 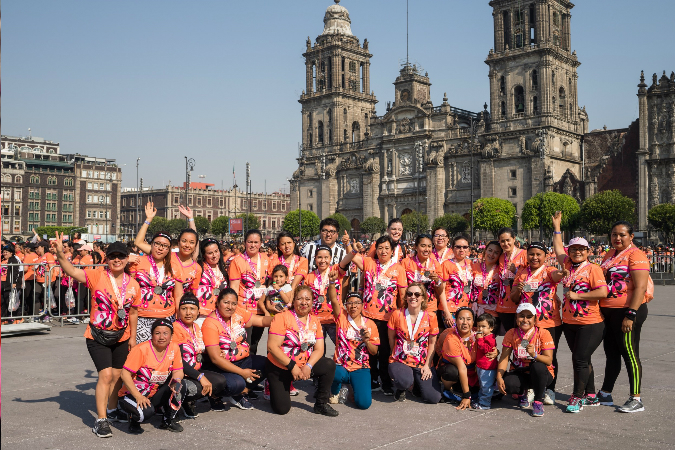 Graduates from the "Avancemos por la igualdad" Program after receiving their medals at the Bonafont Race for a Cause 2019 (Credits: ONU Mujeres/Dzilam Martínez) 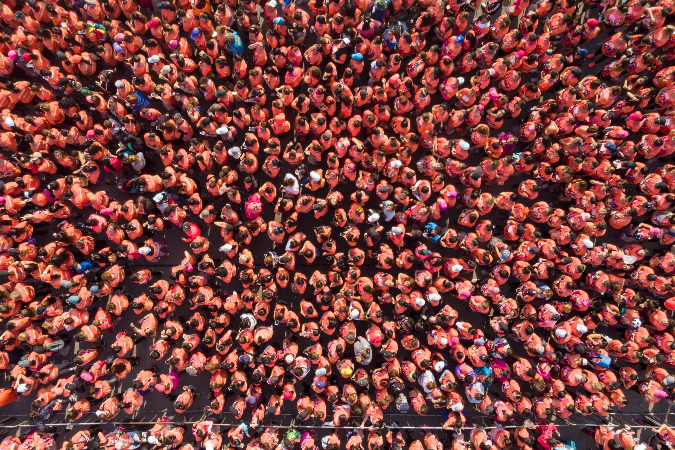