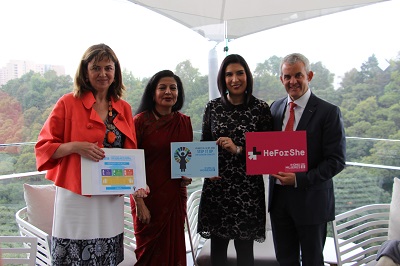 The Deputy Executive Director of the United Nations Entity for Gender Equality and the Empowerment of Women, UN Women, Lakshmi Puri, has carried out her first official visit in the framework of the Mexico 2016 Forbes Forum “Powerful Women”.

During her participation in the Forum, which has the purpose of showing leadership and talent examples of Mexican women, with more influence in the business, political, artistic and social fields, Mrs. Puri pointed out that “it is undeniable that increasing participation of women is a matter of real democracy and social justice.”

She pointed out that “in Mexico, women hold 42 per cent of seats in the Lower Chamber of Congress, the 7th place in the world. This is an outstanding achievement considering that the global average of women in the Parliaments is 23 per cent.”

Likewise, before the presence of more than 100 leaders and decision makers of the business community, politics, academia and philanthropy, the media and the society, the Deputy Executive Director pointed out that in order to achieve substantive equality, it is needed “that all sectors gent involved”, and concluded her participation making a call to Step it Up and so to achieve a Planet 50-50 with full women participation.

Lastly, she highlighted that in order to achieve the 2030 Agenda, she is inviting all women and men to be gender equality champions, since this generation has the potential to accomplish it.

On her own behalf, Ana Güezmes, UN Women Mexico Representative, during her participation in the Table “Let us change the mindset”, she pointed out that “For UN Women the private sector is a key partner to achieve gender equality and the empowerment of women. Recent research show that gender diversity supports businesses to improve their results, and pointed out that personal interest and common interest may go hand in hand.”

During her presence in the Forum, Mrs. Puri held bilateral working meetings with Claudia Ruiz Massieu, Foreign Affairs Minister and business leader women in Mexico, like Mayra González and Claudia Jañez Sánchez, among others.